Home / About the Pastor 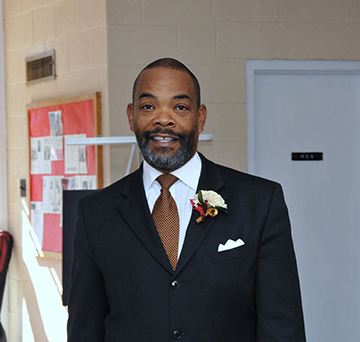 God in His power for mastering the order and design of the universe also selects and designs the lives of those chosen to be His divine messengers.  Whether we understand it or not, everything is one according to His purpose.  It is our blessing that He held within His purpose the creation of Wilson Edward Brown Shannon, born December 18, 1955, in Richmond, Virginia, and reared and taught in the Christian faith with two sisters and two brothers in the home of his grandparents, Rev. Wilson Edward Brown and Florence V. Brown.

Dr. Shannon graduated from Armstrong High School and received the call to the Ministry while serving in the U.S. Army at Fort Carson, Colorado.  He was ordained at the Beacon Light Baptist Church, Colorado Springs, Colorado in 1976.

The First Baptist Church (Centralia) extended Dr. Shannon the call to be pastor in October 1990.  He was installed Sunday evening, March 17, 1991. Often speaking of himself as a pragmatist, he strengthened many of the church’s existing ministries and started needed new ones.  In addition, he broadened the church’s foreign mission efforts.

A major test to Dr. Shannon’s faith came with the destruction of the historic church building (established 1867) by arsonists on April 16, 1996.  He told the congregation on the Sunday after the fire, “God told me to build it back, we’re going to build it back.” Stepping out on faith, Dr. Shannon and the First Baptist congregation celebrated the completion of the reconstruction of the historic building with week long dedication service, June 15-June 21, 1997.

A family man, who loves his children, Dr. Shannon has been married to the former Cynthia Smith since 1975.  They are the proud parents of a son Xavier, a 1998 graduate of Morehouse College; and a 2010 graduate of Virginia State University with a Master degree in Project Management and a daughter, Tawanda, a 2001 graduate of Hampton University; and a 2003 graduate of Parsons School of Design with a Master of Fine Arts in Design & Technology.  He strongly advocates building families to nurture our children, encouraging them to choose productive lifestyles and to grow with faith in God.  Dr. Shannon believes that “through the church we can connect and strengthen family ties.”

Presently he is leading the First Baptist disciples in building an extension to the Samuel Moss Carter Family Life Center to serve as a Haven for Hope to meet the needs of the new century disciple.

Other achievements and positions held by Dr. Shannon include the following: Pastor, Shalom Baptist Fellowship Church (12 years), Recipient of the 1989 Humanitarian Award from the Richmond Redevelopment and Housing Authority, chaplain of the Richmond Juvenile Detention Home (10 years), past Moderator of the Shiloh Baptist Association of Virginia, and past President of the Virginia Fellowship of the Progressive National Baptist Convention, Inc. He served as chairman of the Commission on Finance for the Baptist General Convention of Virginia for 12 years and is known throughout the state as a dynamic speaker.

•      Believed God and renovated the church sanctuary including padding the pews, installing new carpet, repositioning the choir loft and adorning the pulpit with brass railings.

•      He gave the Church a 44 passenger school bus to transport our children to and from youth events.

•      Led the church to rebuild the Historic First Baptist Church, Centralia that was burned to the ground at the hands of young arsons in April 1996.  Organized the Volunteers for Victory and completed the building of the church in 8 ½ months followed by a week long Dedication Service beginning Sunday, June 5, 1997 with the theme, “It Can Be Done, And We Can Do It”…the people had a mind to work.  Nehemiah 4:6.

•      Presented God’s vision to the church to erect an extension to the Samuel Moss Carter Family Life Center, providing 45,000 square feet of usable space that will be used to offer an alternative life style to save our children. Now known as Haven for Hope.

•      He built the 10 brick columns on the hill of the Historic First Baptist Church.

•      He installed the tile flooring in the Fellowship Hall. Trained young boys in laying tile in the Nursery and Choir rooms

•      Because of his preaching and teaching, the church has grown from 300 disciples to over 700 disciples since January 1991.

•      Prayerfully led the church to worship on fifth Sundays.

•      Refocused our Evangelism, History and New Disciples Ministries to better understand their role as a part of Holistic Ministry.

•      Organized the Deacon Family Ministry and led the church to establish an annual picnic.

•      Encouraged the church to change the music hymnals to hymnals that better represent the African American experience.

•      Organized the Inspirational Choir, now the Mass Choir and the Men’s Chorus,

•      Encouraged the church to establish fourth Sunday as Youth Sunday.

•      Refocused the Brotherhood Ministry which gave birth to Camp Courage and the Sons of Success.

•      Praise worship service enhanced by the organizing of Dance Like David Ministry & The Mime Ministry.

•      Organized a Summer Enrichment program to provide meaningful education and fun for our kids during the long hot summer.

•      Organized a Tutorial Ministry because of the strength of our people in education.

•      Founded our Preschool Academy and because of his faith, God has blessed it to grow in enrollment from six children to full capacity.

•      Encouraged disciples to petition Chesterfield County to name the new elementary school in 1996 in her honor of Marguerite Christian, an educator for many years.

•      Supported the honoring of students graduating from various levels of education by the Library Ministry.

•      Led the church into an international ministry with his visits to Harare, Zimbabwe and Johannesburg, South Africa where he witnessed the election of President Nelson Mandela.

•      Responsible for the church establishing an international partnership with a school in Harare, Zimbabwe resulting in 4 ½ tons of books crossing the Atlantic Ocean so that the children in Harare may have a greater educational opportunity.

•      At the urging of former President Nelson Mandela for more education of his people, Dr. Shannon organized the receiving, storing and packing of 5 ½ tons of books that were also shipped to South Africa.

•      Led the church to organize a Transportation Ministry resulting in the purchase of four passenger vans.

•      Executive Board Member of the Progressive National Baptist Convention; Commission on Finance Chair of Baptist General Convention of Virginia; President, Fellowship of Virginia; Moderator for the Shiloh Baptist Association.

•      Encouraged FBCC to support Eagle Scout projects to organize the receiving, storing and packing of 200 pairs of tennis shoes sent to Nigeria, Africa in 2006; and book bags filled with school supplies sent to the West Coast Africa in 2011.

•      Dr. Shannon’s commitment to civic duty allowed First Baptist Church Centralia to become a polling site to serve the citizens of the Bellwood precinct in 2007.